skip to main | skip to sidebar

REDSKINS 2ND SHOULD BE DEXTER

I am about 93% sure the Redskins will never consult me about player personnel, especially high draft picks. But, regardless of their ignorance of excellence, I will offer up my opinions.

With the 4th overall pick I have a growing confidence that the Redskins will select Sam Bradford out of Oklahoma. I think its a lock that the Rams take Suh 1st and its likely that Gerald McCoy goes 2nd to Lions and Eric Berry goes 3rd to Bucs. That leaves plenty of viable options for the Redskins because no guys in position of need will go off the board before they pick. I really do not think Bradford (or Claussen for that matter) is worth a 4th overall pick. I think OT Russell Okung would be a better pick, but I think Shanahan wants to groom his future QB. If Jake Locker from Washington came out this year, I would be on the bandwagon to draft him. But there are no QB's in this draft worth a top 5 pick.

Regardless of their 1st round selection, the Redskins NEED to take Dexter McCluster in the 2nd round. They need his explosion and versatility. Bad. He is 5'8" and under 170, but he is tough as hell and sofaking explosive. I would even say that Darren Sproles is a poor man's Dexter McCluster. Yeah, I said it. Dexter carried the ball out of the I-formation in SEC play over 20 times many times this year. He can take the pounding. He can return kicks and punts (I hate you Randel El) too. Dex-Mac is a great route runner, has awesome hands, and will make an immediate impact next year in some facet of the game. The burgundy and gold need what he brings to the table.

Watch these clips and tell me the Redskins should not take him...

Could Haynesworth Fight Switch to 3-4?

It is well known that the new regime in town wants to switch from a 4-3 to a 3-4 defense. The main idea of the 3-4 is to provide more complexity by being able to create more elaborate blitz packages. You know the 3 lineman are rushing, but usually at least one of the four linebackers will rush the passer as well.

The Redskins are pretty well equipped for the change but the sticking point may be Fat Albert Haynesworth. He would have to play the nose guard position which involves tons of work and usually very few big plays. The job of the nose guard in the 3-4 is to work hard and clog the middle, not necessarily make big plays rushing the passer. Since there is only one "defensive tackle" obviously off the snap the nose guard is ill equipped to burst through the line with the center and two guard right in his path. If Haynesworth can sacrifice some sacks for the good of the team, he could be very helpful in the 3-4 scheme.

An idea would be to allow Haynesworth to play DE, but I am not sure how that is going to work. Not sure if he has the foot speed and motor to make an impact from that position.

While Albert may have some trouble with the switch, I think the switch benefits Brian Orakpo the most. He is an ideal 3-4 linebacker as he is very versatile and a great pass rusher.

While many questions will be answered over the 6 months, I just do not see Albert taking the transition smoothly, which could ultimately cause some problems. We shall see.
Posted by Alex at 10:49 PM No comments: 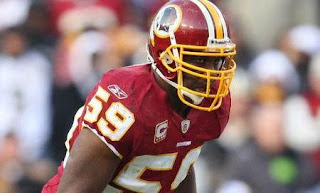 Okay, London Fletcher is finally a Pro Bowler. Yeah, it might be as a replacement, but he is so well deserving of being in that game. Fletcher has been playing at such a high level for so long and his never made a Pro Bowl. 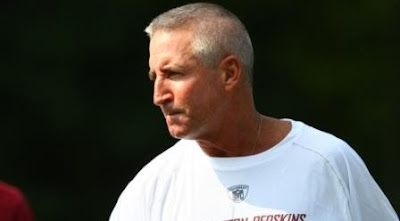 The Redskins are bringing back special teams coach Danny Smith. I think he is a good coach that had to do more than just special teams over the Zorn era. Seems like Smith was always in Zorn's ear helping him with stuff such as time management since Zorny was overwhelmed.

Redskins hired Bobby Turner as Running Backs coach and Assistant Head Coach. Turner, who was on the Broncos staff as the RB coach, has years of experience and he is well respected by his peers and players.

The Redskins have named Bobby Turner their assistant head coach/running backs, the team announced on Thursday.

This is a nice fit for the Shanny staff. It is starting to take shape. More tomorrow.
Posted by Alex at 2:41 AM No comments:

Haslett to Skins to Run Defense

The St. Louis-Post Dispatch is reporting that Jim Haslett will be the next Defensive Coordinator for the Washington Redskins. I would expect an announcement sometime this week.

I really think this is an upgrade over Greg Blatche and the Redskins defense needed a new voice.

Update: Looks like Shanny is set on a 3-4 defense, which Haslett is well versed in. Hopefully the Redskins shore up their linebacking corps over the next few years, not sure how much football London Fletcher has left.
Posted by Alex at 2:05 PM No comments:

Bugel Officially Hangs It Up

Longtime Redskins coach Joe Bugel officially retired today after 14 years with the team. He coaching career in DC covered two very different era's. The first go around (1981-1989) included a Super Bowl and the creation of "The Hogs." The second (2004-2009) included a couple of brief playoff performances, but ultimately less success. Bugel always coached 'em up and was beloved by Washingtonians.

With a new regime in place, this a perfect day to walk away.
Posted by Alex at 1:39 PM No comments: 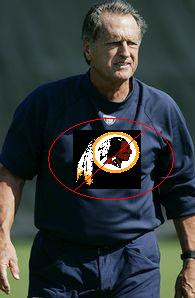 It was widely speculated that Team Shanahan would include zone blocking know-it-all Alex Gibbs, who was most recently on the staff of the Houston Texans. But, it seems that Mr. Gibbs (no, not that one) believes in what Pete Carroll is putting together in Seattle as he has reportedly inked a contract with Seattle.

Gibbs, 68, is no spring chicken (or any other type of chicken for that matter) so I am not sure what kind of NFL future he holds in terms of longevity. He first started coaching for Denver in 1984 and knows Shanahan very well.

Shanny (and Gibbs) is known for a very simple running games that includes somewhat complex zone blocking schemes. While he only has a handful of actual running plays, the blocking schemes vary greatly and keeps the defense on their heels. Gibbs could of helped install the new blocking scheme, but now will have to look elsewhere.

The biggest concern at this point is bringing the proper offensive linemen for the scheme. The perfect guy in the zone blocking scheme is very smart, mobile, and has great footwork. Does this sound like any of their current linemen?
Posted by Alex at 8:39 PM No comments:

Welp, I guess it is Haslett's job to lose.


Last year he was the head coach for the Florida Tuskers of the invisible UFL. Apparently they actually did play games.

What need should be addressed in 1st Round of Draft?